To What Extent is an Exit Strategy Necessary in the Industrial Sector?

First of all, it should be noted that economic activity was not completely interrupted by the corona phase. Contrary to the drama in the media, we are not in a warlike scenario or in a phase of severely restricted lending as in the case of global bank failures. The current situation is causing an interruption in economic activity and - as a result - in demand. The Corona crisis is shaping the German economy, but there are numerous industries that are producing as normal as possible. Although many market participants are currently being prevented from realising planned projects, this does not mean that they will be completely cancelled. The question remains as to what effects the general development will have on the announced new business in the next three to six months.

Around 70 percent of industrial companies continue to manufacture at a high production level. Urgent restrictions require measures to protect against infection and often involve a redistribution of production shifts to prevent employees from meeting each other or to ensure a safe distance. Teamwork has to be modified in some cases, as the distance now required - also in production - demands a different form of work. A further challenge is that of component replenishment. Due to the interruption of global supply chains, many processes are delayed or interrupted.

The remaining 30 percent of industrial companies are directly or indirectly attributable to the automotive industry. Here, it is also important to differentiate between production and engineering / R&D. In many cases, short-time work or production shutdowns have been initiated in the past, particularly in the production area. Engineering is often working on the projects of tomorrow: More than usual, the focus is on the future and the relevant technical preparations. The development department therefore continues to work "normally" with special emphasis with slight restrictions. Due to the expected expansion of government subsidies in the field of eMobility, OEM and TIER1 are working on these projects with particular pressure. Due to the high diversity of industries, the picture is not uniform - it is influenced by company-specific factors.

The announcements of the resumption of assembly at OEMs are encouraging, but cannot yet be concretely confirmed by TIER1. They are often still waiting for the components to be called off.

As a conclusion, a two-part picture remains: business as usual - with adjustments for the situation - but also restrictions or standstill with a high degree of uncertainty. Many companies are currently still expecting downstream slumps in demand, which must be evaluated regularly, preferably on a weekly basis, with regard to current production and also with regard to short-time work.

"Humanity masters such situations! There are an incredible number of success stories around Corona, especially in business. Already today, the IT departments of companies that make the incredible possible are being carried on hands. If we counter the success stories with the negative endurance loop in the news, it will encourage others," explains Hagen Schönfeld, Business Unit Manager Industry and Sector Head Industry of Horton Group International.

What entrepreneurial exit strategies are being pursued in the industry sector?

The industry as a whole is very diverse, so there is no single, manageable strategy. Customers from the automation and robotics industries are currently feeling the reluctance of OEMs and TIER1 in the automotive sector and are hoping for their courage to invest.

Mechanical engineering, on the other hand, is struggling with a wide variety of challenges, such as the spontaneous collapse of the European and American markets, but on the other hand the rapid resurgence of the Chinese market.

All companies want to return to "normality" as quickly as possible, i.e. to previously smooth processes in supply chains, sales, etc.

Have measures or plans been prepared to relocate, change or even realign business areas, if necessary?

The media often presents a distorted picture. There is no attempt whatsoever to call into question the previous model of market economy or post-Corona capitalism. Production will remain globally networked. There will only be occasional government regulations for safety-relevant or pharmaceutical products. Trade restrictions designed to keep the risk of infection low are not known, but they are conceivable. But what advantage would it have to have currently only suppliers in Europe as OEMs? In the end, these are affected in the same way, and it would also be very costly to establish them on the European market.

"I could imagine that in the future, even greater emphasis will be placed on lean manufacturing, automation and the digitalization of processes in all functional areas. The two must be seen in conjunction. Automated processes cannot fall ill with corona, whether in finance or on the production line. Ultimately, efficiency, stability and speed will increase again, and this with a decreasing error rate and lower personnel requirements". Hagen Schönfeld sums up. 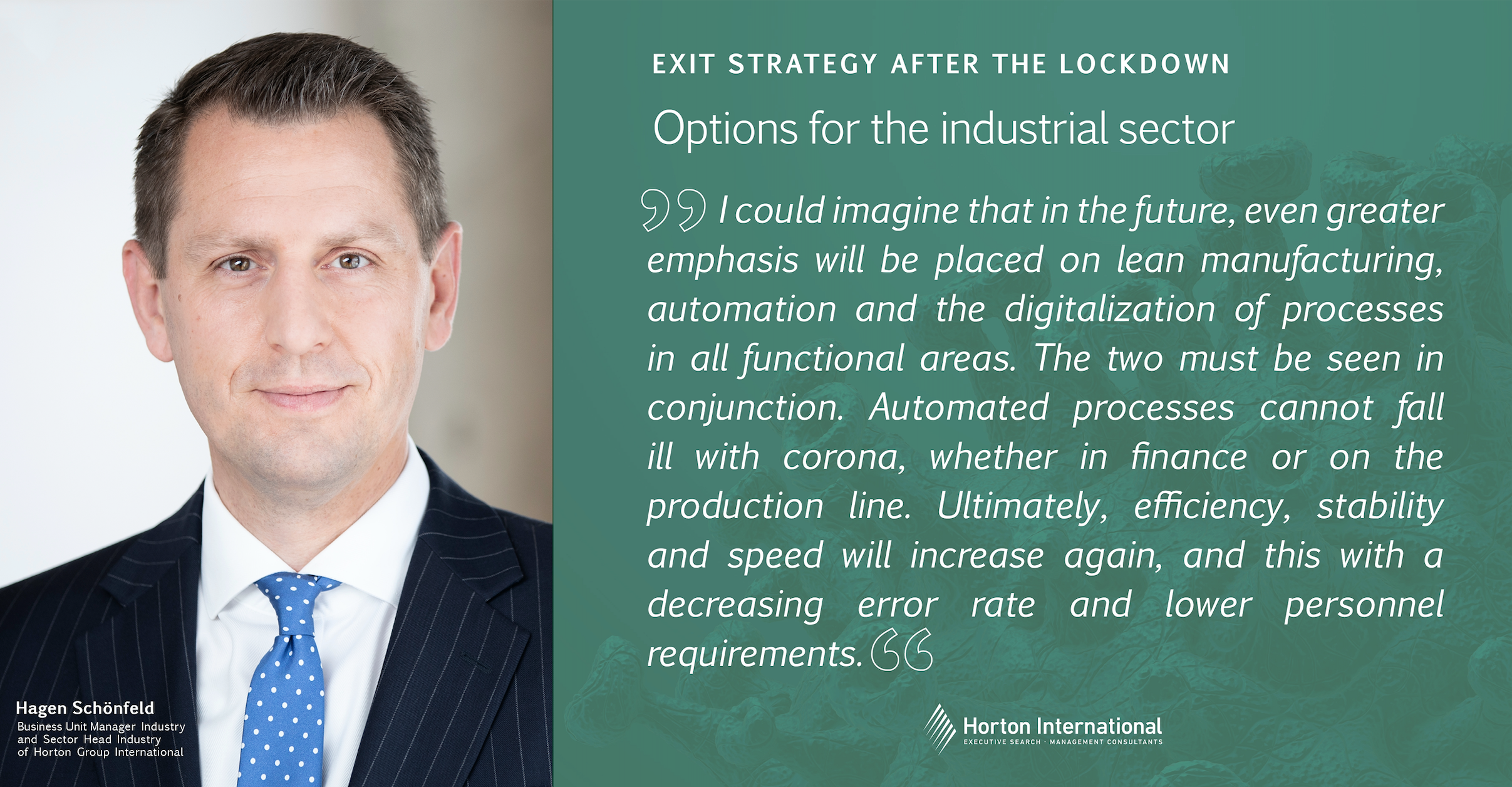 Hagen Schönfeld has mainly been active in the industry and automotive sector since he started his career in personnel consulting. Over the years, he has developed a profound feeling for the trends within the industry.

Hagen started his career as an Officer in the German Armed Forces. After University he developed projects in the real estate sector. In 2011 he started as personnel consultant at a premium executive search consultancy.