Is InsurTech The Next Big Disruptor?

FinTech has been shaping the banking market for the last decade, and now 74% of insurance companies see FinTech and InsurTech innovations as a key force for their industry. Despite the label as a disruptor, InsurTech is set to provide significant opportunities in the insurance landscape.

To find out more about the impact of InsurTech on the market, Matt Grose interviewed Theresa Blissing, founder of Asia InsurTech Podcast and a Big Data thought leader in Insurance.

Theresa’s podcast serves as an interesting and enlightening insight that showcases leaders and innovators in the industry and shares how technology is driving innovation and accelerating the development of insurance across the region.

In this interview, we’re focusing on the impact of InsurTech as a whole, but do look out for our other interview where Matt and Theresa examine the APAC InsurTech market more closely. 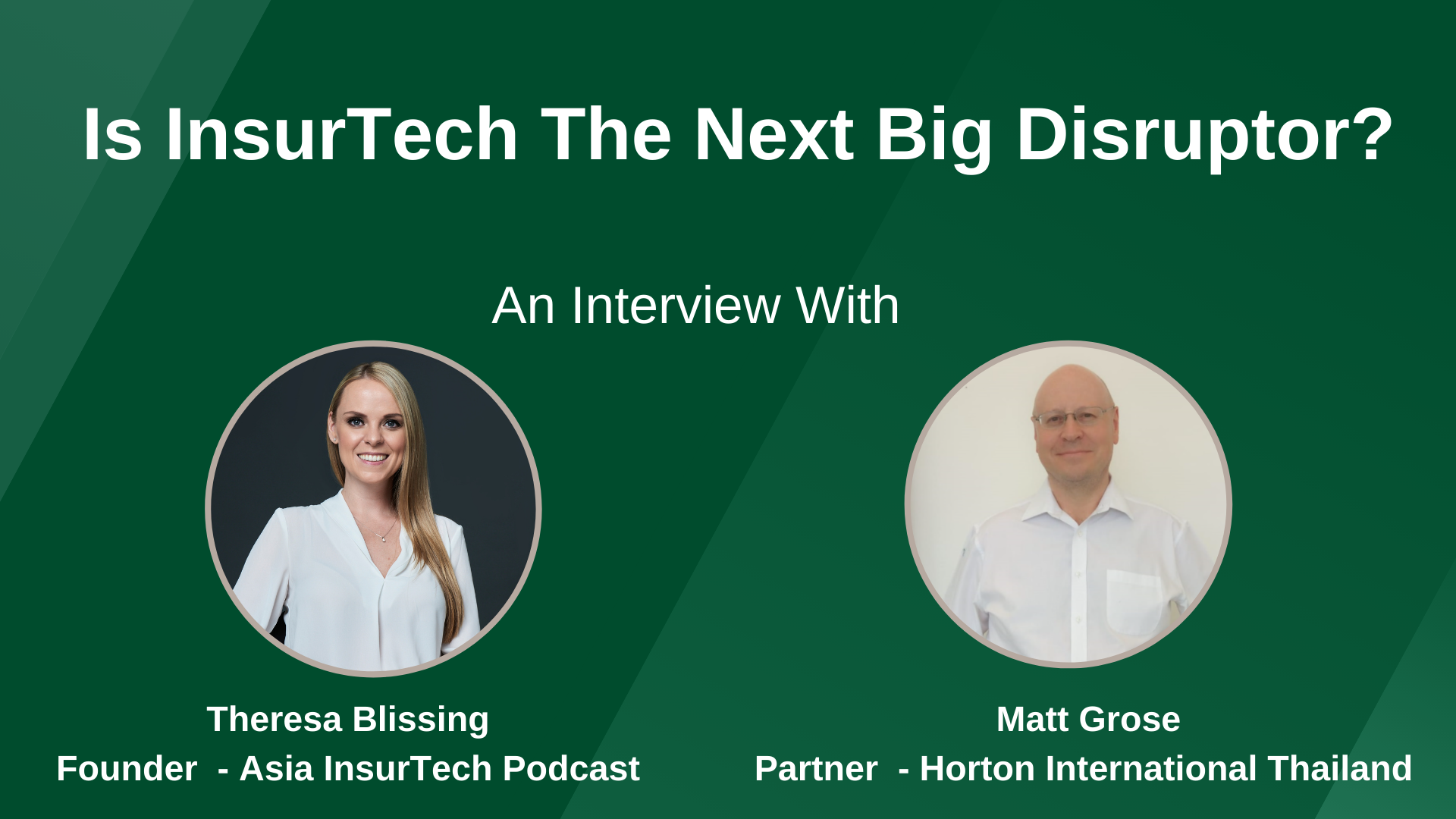 MG: Theresa, you’ve moved from employment in large insurance companies to more independent roles in the insurance space. How did you find yourself in InsurTech?

TB: I spent ten years with Generali, after starting my career in Germany, and got the opportunity to work in Hong Kong, mainly on the life and employee benefits side, when I fell in love with Asia!

By 2015, I was dividing my time between Hong Kong and Germany, and I felt I needed to take a break, but I also wanted to branch out career-wise, so I decided to do my MBA at Webster University in Thailand. My dissertation was on the adoption of big data in the Southeast Asian insurance industry, for which I interviewed close to 30 insurance professionals, including eight regional CEOs.

I then worked for a management consultancy company in Bangkok, which focused mainly on telecoms. During this time, there was still quite a lot of interest in me from the insurance world due to my work in the data analytics field – the Singapore Actuarial Society invited me to speak, and the Singapore College of Insurance asked me to put together a seminar.

From this, I naturally began to look into InsurTech and spent a year exploring the global InsurTech landscape. I quickly realised that there was very little information about what was going on in Asia. So, I decided to start the Asia InsurTech podcast by teaming up with Michael Waitze, who runs a lot of podcasts, to try to address this gap.

First of all, we started by talking to InsurTech entrepreneurs but quickly decided to include insurance companies and other movers in the region. Since May 2019, we have published a new podcast every Monday.

MG:  So, what do we even mean by the term ‘InsurTech’? It seems to be very broad as generally it is just taken to mean any technology that helps in insurance.

TB: I usually try to differentiate the InsurTech players into two broad categories. The first I call ‘enablers’ – a company that helps with technologies along the value chain. They are usually B2B, and their clients are normally insurers.

Then there are the ‘disruptors’ who focus more on the end consumer, either as an intermediary, for example, Policy Bazaar in India, or new carriers such as Sing Life in Singapore, or ZhongAn in China.

I am not sure that the term disruptor is always the right term, though. In the case of tech provision for intermediaries, , these players are actually partnering with incumbent carriers effectively rather than disrupting them.

MG: I think you have tied it down very nicely with the terms, though I too have major issues with the ‘disruptor’ word as I feel that using it is not itself being customer-centric, as you may be disrupting an industry but indeed not the end customer, far from it.

So by ‘enabler’, we mean things like AI, analytics and OCR. These are all the tools that insurers love, as they are always keen to improve processes and controls over underwriting and claims, including payments.

In that case, are we seeing any kind of discernible linear progression from carriers focusing more on enablement in the earlier days of InsurTech and now moving more into ‘disruption’?

TB: I think they are just becoming more comfortable with InsurTech generally. Earlier on, there was a fear of the disruptors, so the focus was more on enablers.

However, over time, they have realised good partnerships can complement (and not necessarily threaten) their existing distribution and business models. What’s more, there is a clear consumer need for these interventions.

MG: So, would it be fair to say that insurers now know that partnerships with InsurTechs are the way forward and not to try to go it alone?

TB: That is definitely the model moving forward. Insurers have tried building from inside themselves, but, in many many cases, they have failed. This is partly a cultural issue.

Insurance is generally a conservative and risk-averse industry. If we look at age distribution in insurance companies – the average age is 26 at Google but 44 in the insurance sector. Furthermore, people in insurance still often stay their whole careers with one company. Consequently, the culture of insurance companies means they are very focused on their day to day activities, and their skill sets are built around this, which is why a lot of in-house innovation efforts have failed.

This is why we see quite a lot of corporate venture building activity. Avo in Hong Kong, for example, has the look and feel of a start-up but have actually come out of Asia Insurance and Hilliard Capital. Their CEO (who heads up both entities) told us how this venture has helped attract new talent that otherwise would have been difficult to source.

As a result, InsurTechs are helping to make insurance a bit more ‘sexy’ as a place to work!

The more established players are going this route too – AIA, who has, until quite recently, been quite conservative, are also going with the partnership route. They have recently formed links in start-ups in Malaysia and with Vietnam’s ecommerce player, Tiki, so this is a confirmed trend for the industry.

Theresa Blissing was in conversation with Matt Grose. The contents of this interview have been edited for clarity.