Exit strategy after the lockdown - What about the life science industry?

As in many other sectors, the current crisis is also changing fundamental areas in the life science industry. There are major changes in the regulatory environment and across the entire value chain. Many companies in this sector are dependent on government support.

The life science sector has to be viewed in its various divisions:

The pharmaceutical sector is quite stable despite the crisis. Provided that the companies have replenished their raw material stocks before the restrictions of free trade. Nevertheless, a relatively high level of dependence on the Asian markets could lead to problems within the supply chain in the medium term. In principle, the pharmaceutical industry is more likely to be on the winning side of the crisis due to pharmacy distribution and the existing prescription requirement. However, as in many other industries, there is a general reluctance to hire new staff in order to control costs. Only important positions are being filled and those that are being filled must currently be approved by a higher authority than in the 'normal case' in management.

There is also a dichotomy within medical technology. Companies for ventilators such as Dräger in Northern Germany and specialized industrial companies for intensive care units can hardly escape from orders. By contrast, other areas of industry are not spared the economic consequences of the corona crisis. According to a recent survey by the industry association Spectaris and Medical Mountains GmbH, around two-thirds of the companies surveyed assess the current business situation as having deteriorated significantly and expect sales to fall if it is blocked for a longer period. In addition, almost half complained about supply bottlenecks and more than 60 percent even reported a significant drop in demand. Here, too, the dependence on Asia with existing restrictions on free trade and the interrupted supply chain is noticeable. Hiring freeze, short-time work, etc. are pending - government support measures such as tax deferrals provide relief in the current situation.

"At present, no specific exit strategy for the life science industry is discernible - and in some cases, it is not even necessary. In the medical field, it is advisable to resume all treatments in all medical practices and hospitals, such as postponed operations.

Likewise, a restoration of the partially interrupted supply chain is urgently required. If possible, alternatives should be provided. Free trade should also be resumed urgently in order to cushion the general downward trend," explains Johannes Suciu, head of the Life Science business unit at Hager Unternehmensberatung.

"In the period after the lockdown, many companies in the life science sector are planning to rebuild certain production capacities within the EU - at least for the time being as "hidden reserves". For critical products and ingredients, the 'just in time delivery' concept is critically reviewed. At present, there is also a tendency for production to return from China and India in the medium and long term due to rising wage and logistics costs," Suciu continues.

A positive side effect of the crisis is that investments in industrial automation are being accelerated. The topics of digitalisation of production and robotics have achieved a much higher priority in a very short time. Many CFOs have also noticed that numerous topics can be dealt with in a technically sound manner without the travel effort required to date. This saves millions of euros for large pharmaceutical companies - a further step towards establishing digital meetings that previously seemed impossible.

There are winners and losers of the current crisis in the life science sector as well. In many cases, the products that are stable and established finance those that are stagnating or declining. An exit strategy is difficult to plan without a foreseeable end to the crisis and is not necessary for some companies in this sector. The quintessence, which is common to almost all industries, is that the topics of digitization and robotics are receiving higher priorities in the management agenda than was conceivable just a few weeks ago. 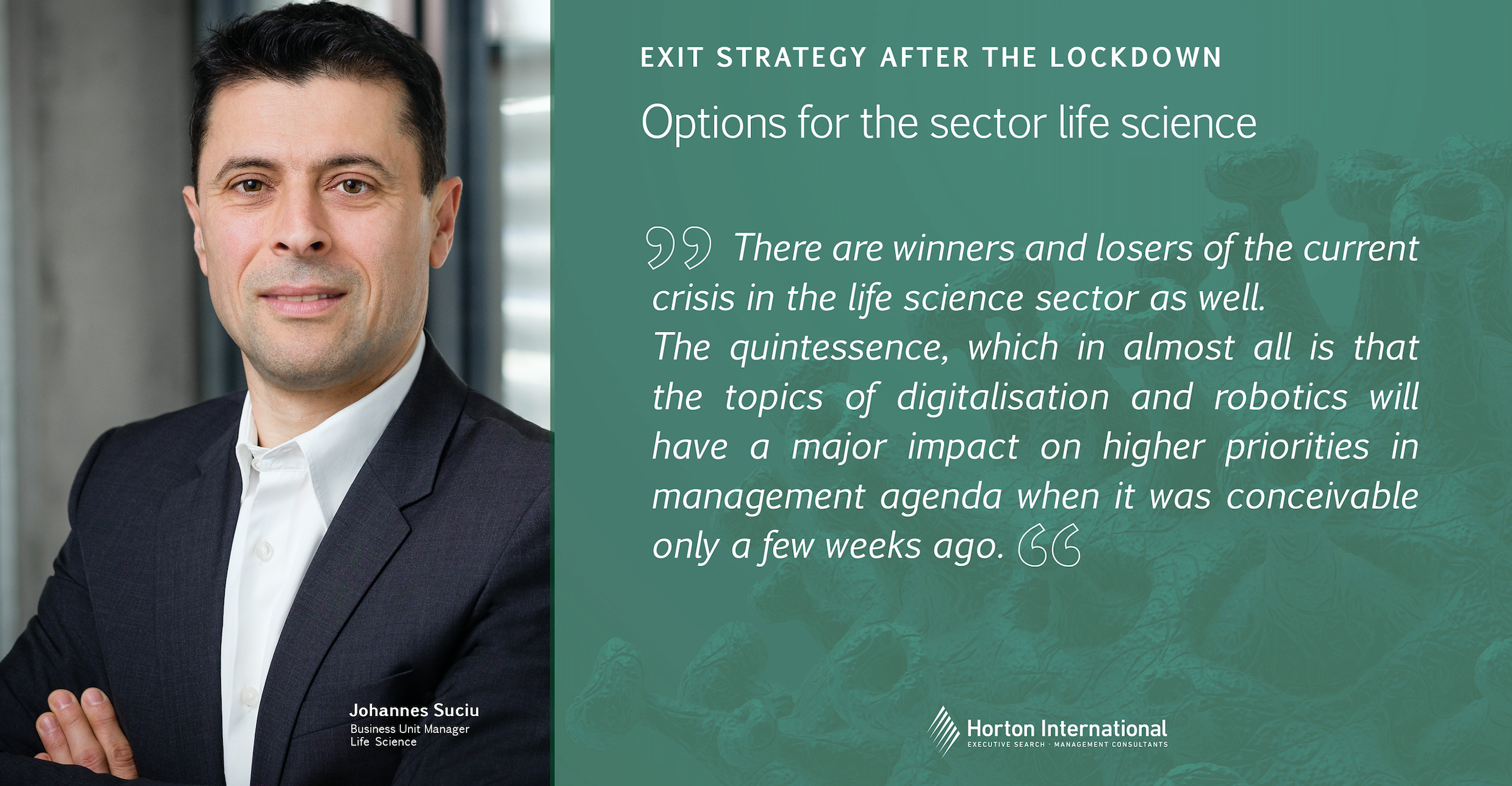 Johannes Suciu is an executive search expert and brings many years of specialist and management experience in the consulting industry and in the life science environment.